Solved?
.After much tut tuting from Highways England (HE) it would now appear they might look at an option to reduce traffic on the Arundel – Worthing – Lancing section of the A27 that has been proposed by newly formed group 'ByPass Not A27 Through Pass’

This option makes use of the A283 and although a road maintained by West Sussex County Council (WSCC) HE are working closely with them in order to obtain a satisfactory outcome to the long history of failed schemes for the A27 corridor in the area.

The A283 route proposed starts at the Shoreham flyover and continues to Storrington where it joins the B2139 and finally the A29 to rejoin the A27 at Fontwell. 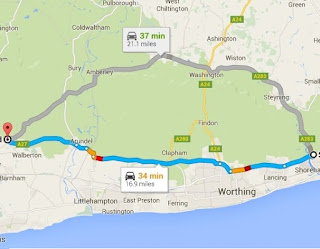 Clearly there are some difficulties to over come as this option is within the South Downs National Park (SDNP), but compared to what could be on the cards for the Arundel A27 SDNP section - Binsted village cut in two, ancient woodland trashed, monstrous viaduct destroying iconic landscape vista - residents feel to fully bypass Arundel. Worthing and Lancing in one go; this option should have been looked at closely by Stakeholders much earlier.
Even our long suffering friends in Storrington are likely to support this option if traffic is removed from their High street with their long mooted bypass that this option could provide. Those using this route already and backed up by a Google flyover, indicate any land needed for any improvements to the existing roads should be available.
The fly in the ointment is where the B2139 climbs out of Houghton onto the A29 at Whiteways Lodge. A tunnel would be needed as the gradient is difficult for lorries.  A bypass for Amberley and Houghton should be included as well.

Ah but what about the extra distance and travel time.

Compared to the £250million likely for any Arundel scheme and the massive cost for Worthing – Lancing - if over 200 hundred properties are demolished or blighted by a multi lane option is estimated to be over £980million. The A283 option compares well.

A less ambitious scheme to only bypass Worthing but also using the A283 is also being looked at.
Again leaving the A27 at the Shoreham flyover the route joins the A24 at Washington then the A280 at Findon before rejoining the A27 at the Patching junction. 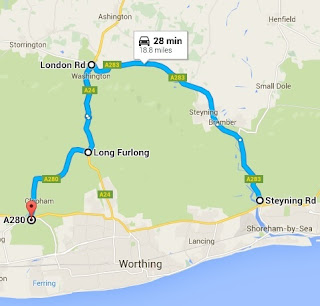 As you can see this option takes 28 minutes to cover the 18.8 miles.
The direct Shoreham to A280 via Worthing route is 17 minutes and 8.3 miles, again no traffic.

Once again this route impacts on the SDNP, in particular where the Longfurlong is used. At present that section is a long single carriageway gradient and difficult for lorries. A dual carriage here would seriously impact the Park.
Posted by A27 ALARM at 22:34