Politicians are not normally shy when there is the opportunity of gaining extra votes. But if the local election leaflets that are coming through our letter box are anything to go by, the hopeful candidates are steering well away from transport issues, yes and the A27.
However a beacon of light has shone from an unlikely source. In the latest issue of Labour Today being delivered, the Party states in a half page feature: ‘Transport policy for Worthing… Labour plans to give it a new direction’. 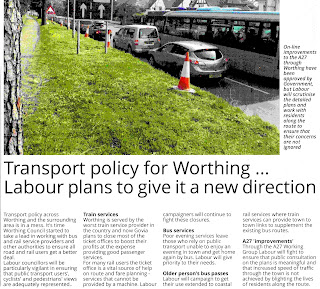 So what are these bold new plans? For starters if elected Labour councillors will ensure that public transport users’, cyclists’ and pedestrians’ views are adequately represented.
Labour is also concerned about the closure of ticket offices and the general poor service Govia is providing to rail users.
Evening Bus services are also on Labours radar highlighting problems for those who want to spend an evening in town without the worry of if there’s a bus to get them home.
In a move to implement an integrated transport system Labour will campaign for the older person’s bus pass to be extended to the coastal rail service. A common sense measure to reduce the need for a car.
Labour has not been shy either to take on the latest A27 upgrade saga. Already part of the consultation process they pledge to scrutinise the detailed plans when published and work with residents’ along the route to ensure their concerns are not ignored.
Posted by A27 ALARM at 18:43