If  the organisers of Thursday evenings A27 meeting had any concerns about filling the large Exhibition Hall at Worthing college those concerns quickly turned to amazement as over 300 seats and all standing room was quickly taken, and it seemed some quick thinking was needed. 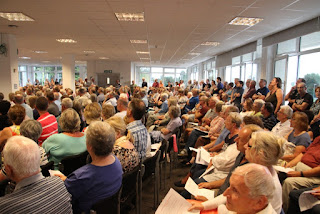 However as one of the organisers explained later. “We’d actually done some contingency planning in advance, so it wasn’t really quick thinking – it was putting our contingency plan into operation by holding a parallel meeting outside to cope with the overspill.”


And some overspill. Waves of people continued until about 250 had gathered outside on the college playing fields to be addressed by a organiser. 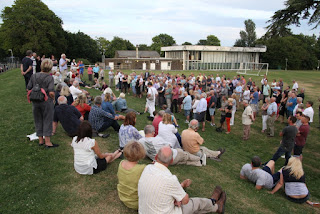 The inside meeting started promptly at 19:30 with the Chairman introducing the speakers and explaining that the meeting was being held in order to let residents know what could happen to the A27 through Lancing and Worthing over the next 6 years or so.
The speakers then explained that the A27 was a road controlled by Highways England and it was they and their consultants Parsons Brinkerhoff who setup what is known as the Stakeholder Group (SG) of interested parties during 2014 to evaluate the various options available. The interested parties are both local MP’s. Various councillors. An assortment of local business leaders and environment protectors. But no local residents, that was until very recently and after many options for the road had been rejected by the SG.
There have been four SG meetings since 2014 and at the start there were six options including tunnelling – there is a full list of the options if you scroll down to the last posting then click 'older posts' it's the next post.. Following the ‘pruning’ all that is left is the on-line option, or as most people would call it the existing route of the road. No relief road or bypass north of the downs or under it due to the cost. Nothing but the existing road either turned into a multi lane dual carriageway or a do minimum scheme of selective widening with traffic signal and roundabout work. Both will only encourage even more traffic onto the road and the deadly pollution it creates.

The meeting heard all indications suggest it is the multi lane option that the politicians and businesses want anyway. AND TIME IS RUNNING OUT TO CHANGE THEIR MINDS.

So What is Highways England present A27 Worthing - Lancing Timetable

ByPass not A27 ThroughPass the group holding the meeting want as the name suggests relief from the pollution and mayhem created by even the existing road. And so do 90% of those in the Hall judging by the questions asked after the speakers had finished.

Questions such as: We can’t get out of our driveways now without waiting for god knows how long when a gap in the traffic will appear. With four lanes to cross we’ll be trapped.
Another questioner asked what happened to all the £millions raised when the houses and land compulsory purchased was sold following the collapse of the 1995 scheme.
Perhaps the highlight was the opinion offered from local resident and radio traffic report presenter and statistician. He quoted from his 15 years of traffic stats that indicate unless junctions are improved traffic will still bunch up. Not in the existing pinch points, but on the newly built multi lane sections.
The Chairman brought the meeting to a close by thanking everyone for coming and promising this is a fight we will win as the people of Lancing and Worthing Deserve Better.
The meeting finished at 21:30.
Posted by A27 ALARM at 21:13